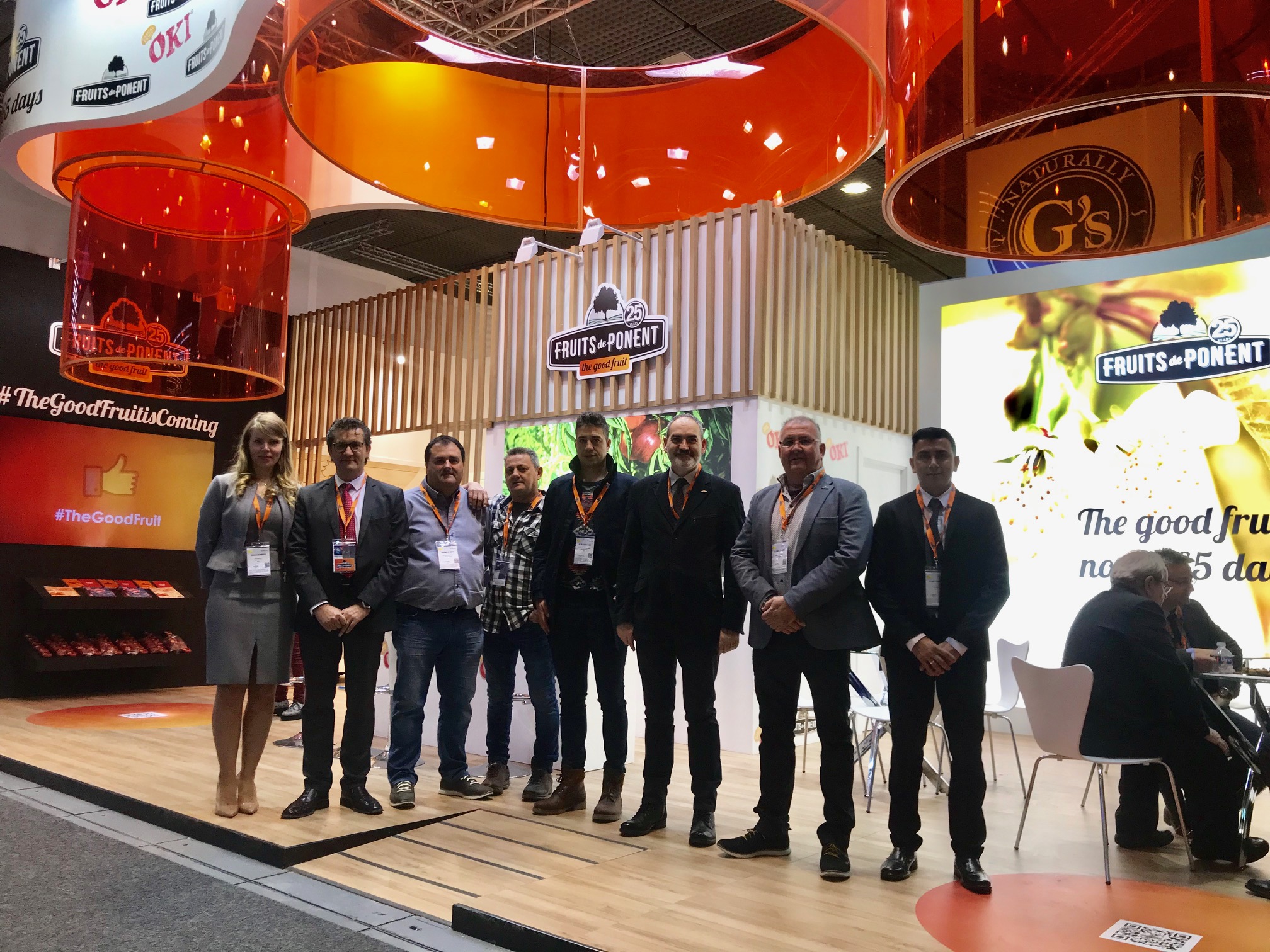 Fruits de Ponent produces 62 million kilograms of fruit per year, of which 80% correspond to stone fruit (peaches, nectarines, flat peaches) and 20% to pip fruit (pears, apples), as well as other types such as almonds and cereals, as well as producing and marketing extra virgin olive oil and having other business units such as an Agroshop and Ramell fuel service stations. Currently, Fruits de Ponent, exports fruit to more than 50 countries on four continents.

All the fruit of the company is cultivated following the integrated production criteria, which minimizes the use of substances that can affect the environment, achieving results of up to almost zero waste. In addition, Fruits de Ponent is accredited by the main private quality certifications such as GlobalG.A.P, BRC Food, IFS and Nurture.

With this new addition, Anecoop, which in 2015 launched a commercial office in the Ebro Valley, strengthens its presence in the area and strengthens the stone fruit harvest from June and extends the offer of its products from partners with pip fruit.

According to the CEO of Fruits de Ponent, Sebastià Escarp, “after serving 25 years in the market, we have considered this alliance with the aim of continuing to grow and share useful synergies for both Anecoop and Fruits de Ponent”.

The CEO of Anecoop, Alejandro Monzón, has stated that the incorporation as a partner of Fruits de Ponent, with whom they have been collaborating for years, “allows us to reinforce our solidity, with a powerful structure that we have managed to establish together. Today it is an honour that Fruits de Ponent and Anecoop are now part of the same project. Together we add the strength of the integration of the offer, with the aim of reaching a basic dimension to be more competitive”.

Both Fruits de Ponent and Anecoop are present at Fruit Logistica 2018, which starts today in Berlin and will continue until Friday, February 9. They have separate stands for the cooperative based in Alcarràs in Hall 8.2 Stand B-05 and Anecoop in Hall 18, Stand B-01.

The raw materials (fresh fruits and vegetables and wine) marketed by Anecoop come mostly from the Valencian Community, Andalusia, Murcia, Extremadura, Castile and Leon, Catalonia, Navarre and Aragon. It integrates companies whose activity ranges from research for varietal improvement, to the delivery of the product at the point of sale. It consists of a commercial structure composed of nine international companies and five local offices in the Spanish territory (Valencia, Almeria, Murcia, Seville and the Ebro Valley). Its commercial network is located in strategic points of the international fresh fruits and vegetables market: Spain, France, the United Kingdom, the Netherlands, the Czech Republic, Slovakia, Poland, Russia and China, the latter aimed at the marketing of wines. It also has companies for logistics and transport services, two fields of experimentation and development, a company for the production of juices and preserves and one for the preparation of fourth and fifth range fruit and vegetable products.

With the incorporation of Fruits de Ponent, Anecoop has 69 horticultural and vitivinicultural partners located in the main agricultural production areas in Spain. In the last two years, six new members have joined the Anecoop Group: two in Murcia (Toñifruit and Frutas Condiso), two in Andalusia (FOASAT and Tomasol), Huercasa in Segovia and now Fruits de Ponent.