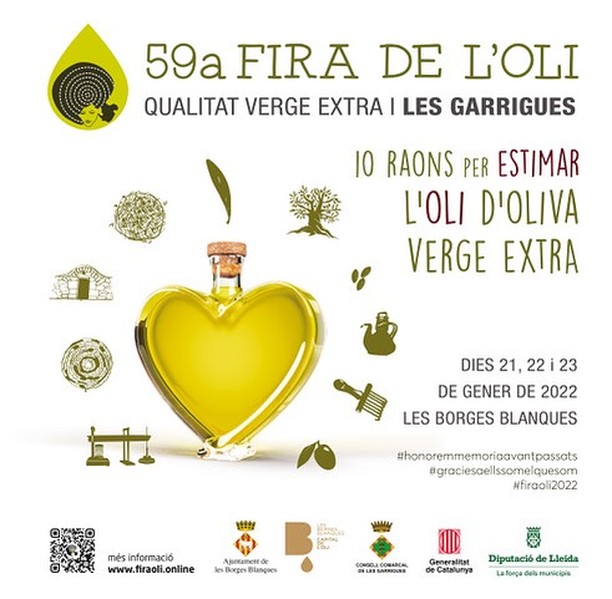 The Fruits de Ponent Cooperative Group will be present at the 59th edition of the Fira de l'Oli Qualitat Verge Extra i les Garrigues, which will be held in Les Borges Blanques from January 21 to 23.

It will participate, specifically, as Molí d'Alcanó, having a stand in space O-5 of one of the venues that host the event, the Pavelló de l'Oli. There, visitors will be able to enjoy the different products that Fruits de Ponent, through Molí d'Alcanó, markets within this sector, such as the extra virgin L'Or de Ponent oil, the special selection Praedium KYLATT and the solidarity oil which this year has been launched to support the Association Against Cancer in Lleida. There will also be a sample of the 'Mediterranean Foods' product catalog from Fruits de Ponent, which includes nuts, olive oil, apple vinegar, olive pâté, etc.

This year's Fira de l'Oli will combine the face-to-face modality with the virtual format, which began last year and was very well received. The inauguration will be chaired by the ‘Consellera’ of Social Rights, Violant Cervera, while the closing will be in charge of the cook and businesswoman Teresa Carles.

In this 59th edition, the event will once again be one of the best showcases to present the novelties of the olive sector and give visibility to the territory's agri-food products. There will be 100% occupancy, with about eighty exhibitors, 30 of them linked to the extra virgin quality oil sector, and 49 linked to the rest of the local agri-food industry, which will occupy a total area of ​​more than 5,000 square meters.